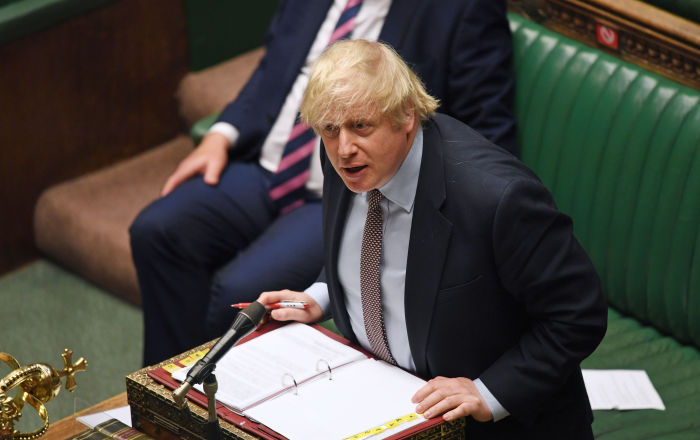 Boris Johnson is to announce the government’s strategy for rebooting the coronavirus-battered economy of the country in a major policy speech in Dudley in the West Midlands on Tuesday, reported The Telegraph.

According to extracts of the speech released his office, as COVID-19 lockdown restrictions are lifted, the UK Prime Minister will unveil a massive spending plan to secure recovery, echoing the pledges he made before December’s general election, when his Conservative Party gained parliamentary seats in a landslide victory.

Johnson will reportedly recommit to his earlier spending promises, announcing 5 billion pounds ($6.2 billion) of investment into building roads, schools and hospitals, with a strategy targeting further capital spending to be published in autumn.

Boris Johnson is to compare the government’s impending strategy with the “New Deal” programmes led former US President Franklin D Roosevelt, which capitalised on government spending to resurrect America from the worst economic crisis in its history during the Great Depression in the 1930s.

“It sounds positively Rooseveltian, it sounds like a New Deal. All I can say is that if so, then that is how it is meant to sound and to be, because that is what the times demand,” the Prime Minister is expected to say.

The speech is also to lay emphasis on “a government that is powerful and determined and that puts its arms around people at a time of crisis.”

“This is a government that is wholly committed not just to defeating coronavirus but to using this crisis finally to tackle this country’s great unresolved challenges of the last three decades…,” Johnson is to say, according to Downing Street.

The Prime Minister will unveil specific plans to “build the homes, to fix the NHS, to tackle the skills crisis, to mend the indefensible gap in opportunity and productivity and connectivity between the regions of the UK”.

Pledge to ‘Level Up’

Johnson is expected to “double down” on his earlier announced pledges to “level up” the distribution of wealth across different regions of the country as an inherent part of plans for reviving the economy.

“Too many parts of this country have felt left behind, neglected, unloved, as though someone had taken a strategic decision that their fate did not matter as much as the metropolis,” he will say.

“If we deliver this plan together, then we will together build our way back to health,” the Prime Minister is expected to say in his speech.

No Going Back to Austerity

On the eve of his much-anticipated speech, Johnson confirmed in an interview for The Mail on Sunday that his government would not “go back to what people called austerity”, imposed the Conservative Party after the 2008 financial crisis.

We want to build our way back to health. If Covid was a lightning flash, we’re about to have the thunderclap of the economic consequences.

We’re going to be ready.

Read my full interview with The Mail on Sunday here: https://t.co/DX9tIURqKI pic.twitter.com/y0mUpgCJru

​Dismissing criticism of his government’s handling of the coronavirus pandemic, Johnson vowed that spending on infrastructure would help “build our way back to health”.

“If Covid was a lightning flash, we’re about to have the thunderclap of the economic consequences,” Johnson was quoted as saying.

The COVID-19 lockdown restrictions that came into force at the end of March are gradually being lifted in the UK, as Prime Minister Boris Johnson announced that pubs, restaurants, hotels and many other businesses would be able to welcome back customers from 4 July.

However, the UK remains “on a knife edge” and must act “sensibly” over the summer months to avoid triggering a second wave of the disease, warned Sir Jeremy Farrar, the director of the Wellcome Trust.

Currently, there have been more than 312,000 confirmed cases of coronavirus in the UK, with the death tally from the respiratory disease at over 43,000, government figures show.