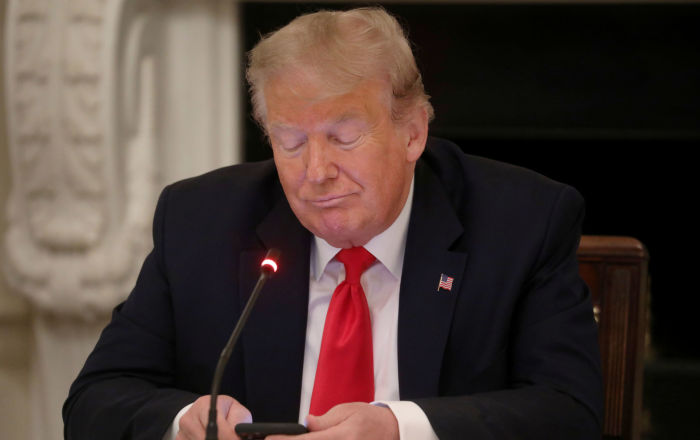 Donald Trump attacks some US allies over the phone and focuses particular ire on female leaders, CNN reports, citing White House and intelligence sources with knowledge of the private conversations.

The US president referred to some female heads of state in terms described unnamed officials as “near sadistic”. In particular, he reportedly called German Chancellor Angela Merkel “stupid” and accused her of “being in the pocket of the Russians”.

Trump also called former Theresa May a “fool” and spineless as he confronted the former UK prime minister over Brexit, NATO and immigration policies, according to one source.

It is understood that May got “flustered and nervous” in response to Trump’s diatribes but Merkel remained calm and unruffled. However, a German official told CNN, the calls were “so unusual” and “aggressive” that Germany’s government took measures to keep their contents secret and cut the number of officials monitoring those exchanges.

Sources who were familiar with the contents of the phone conversations claimed that Trump also regularly bullied other Western leaders, including France’s Emmanuel Macron, Canada’s Justin Trudeau, and Australia’s Scott Morrison.

According to CNN’s report, Trump also likes to deride his predecessors, especially Barack Obama and George Bush. He told world leaders that the former presidents “didn’t know BS” and praised himself for being smarter and “stronger” than the “imbeciles” and “weaklings” who occupied the Oval Office before him.

The interviewed officials described the president’s overall behaviour in the calls with foreign leaders as a “danger to the national security of the United States” because of how unprepared Trump was and because he often appeared to pursue his personal agenda rather than national interests.

The sources admitted at the same time that there still were some instances where Trump acted “responsibly and in the national interest”.

Donald Trump is yet to comment on the report. White House deputy press secretary Sarah Matthews said in a statement: “President Trump is a world class negotiator who has consistently furthered America’s interests on the world stage. From negotiating the phase one China deal and the USMCA to NATO allies contributing more and defeating ISIS, President Trump has shown his ability to advance America’s strategic interests.”