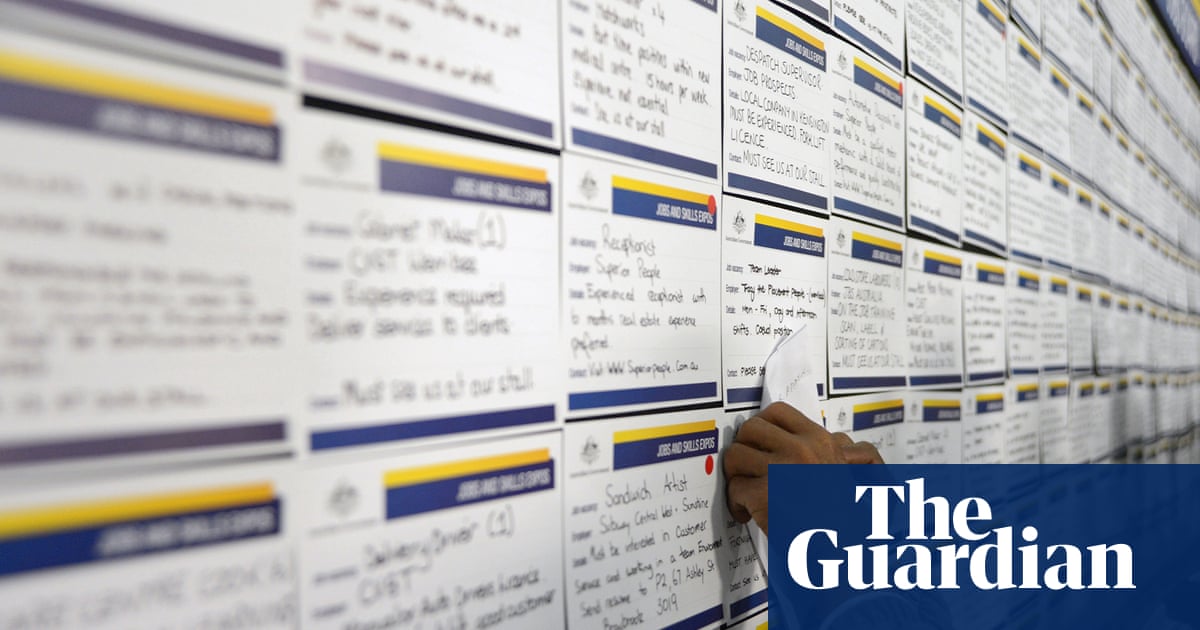 Claims that Australian business owners are struggling to recruit staff because of a lack of applications are based on just a handful of responses from among 2,324 surveyed employers.

Critics including Labor and the Greens have accused the Australian government of amplifying anecdotal reports about jobseekers turning down work in an apparent effort to lay the groundwork to cut government support payments. Kate Carnell, the small business ombudsman, also said the majority of people wanted to work.

The government released new data from the National Skills Commission on Tuesday that indicated some businesses had reported a shortage of applicants for jobs, which had been the basis for the Australian newspaper’s front-page story under the headline “Jobless opt for dole over work”.

But a close analysis of those figures shows that of the 2,324 employers contacted for the survey, only about 22% of them (514) said they were recruiting.

Of those 514 employers who were recruiting, 27% (139) reported that they were having – or expected to have – difficulty recruiting staff.

Of those 139 having difficulty, just over 50% (or 72) cited lack of applicants as a reason. Other factors cited in lower numbers included that applicants lacked experience, employability skills or technical skills.

The report said regional employers were “generally having more difficulty filling their vacancies than those in capital cities with many regional employers citing their location as a reason for their difficulty”. Occupations difficult to recruit for included child carers, metal fabricators and welders, truck drivers and receptionists.

The National Skills Commission’s employer survey – conducted between 25 May and 19 June – also indicated that the level of employers who reported difficulties in recruitment had decreased to 27%, from a level of 38% in early April.

The employment minister, Michaelia Cash, told the Australian it was “now time for jobseekers to start to re-engage with the job market” – prompting Labor’s employment spokesman, Brendan O’Connor, to accuse her of “cherry-picking data in order to demonise jobseekers” when the employment market had collapsed.

The figures were released a day after Scott Morrison told the Sydney radio station 2GB that the government could not allow the jobseeker unemployment benefit – which was effectively doubled for six months until September – “to become an impediment to people out and going doing work, getting extra shifts”.

The prime minister cited “a lot of anecdotal feedback from small businesses even large businesses where some of them are finding it hard to get people to come and take the shifts because they’re on these higher levels of payment”.

Labor accused Morrison of “having his head in the sand” given that there were now 12 Australians on unemployment payments for every one vacancy.

Linda Burney, the opposition spokeswoman for social services, called on Morrison to apologise for his “out of touch” comments, which she said implied that Australians were remaining on unemployment benefits choice.

“The prime minister and the government have briefed media today with nothing more than anecdotal evidence,” she said. “These comments from the prime minister are deeply hurtful and unhelpful to the millions of Australians out of work.”

Burney said the vast majority of Australians on jobseeker were doing the right thing and wanted to be back in the workforce. She argued that reverting to the old $40-a-day rate would push people into poverty and threaten the economic recovery.

The leader of the Greens, Adam Bandt, said Australian Bureau of Statistics data showed job vacancies decreased 43% over the May quarter and 93% of businesses reported no vacancies at all in May.

“The jobs just aren’t there, everyone knows it and the data proves it,” Bandt told Guardian Australia. “Instead of pushing people off a financial cliff based on what he says he heard from Barry down at the pub, the prime minister should invest in job-creating nation-building projects so everyone who wants a decent job can get one.”

“I think people who just want to sit on the couch and get jobseeker is right at the margins. I don’t believe that there are huge numbers of people in this space.”

Australian economy will need up to $90bn extra after coronavirus shock, report says

But Carnell said her office had heard from a number of small businesses seeking help over how to address the issue of long-term casuals who were receiving the $1,500 fortnightly jobkeeper wage subsidy and were refusing to work their shifts.

“The silly bit of it of course is when September 24 happens [when jobkeeper is due to end] they might not get any more shifts and not get paid – … it’s a pretty short-term view on a job.”

Carnell said she had also heard of potential casual hires who were receiving $1,100 a fortnight through the enhanced jobseeker payment. In hospitality, where wages were moderately low, “the temptation will be not to take a job because you can earn just as much doing nothing as you can having a 20-25 hour a week job”.

“A large share of the difficulty employers are having filling vacancies is due to a lack of suitable skills in the available workforce despite the current levels of unemployment,” said Innes Willox, the Ai Group’s chief executive.

The Australian Council of Social Service said many people would struggle to find paid work given that Australia had just experienced the largest fall in jobs since the Great Depression. “People are desperate to find jobs but there are not enough available,” said its chief executive, Cassandra Goldie.

The government is considering the future of its big-ticket economic support measures after receiving a report from the Treasury about jobkeeper. Announcements are due in July after the Eden-Monaro election this Saturday.