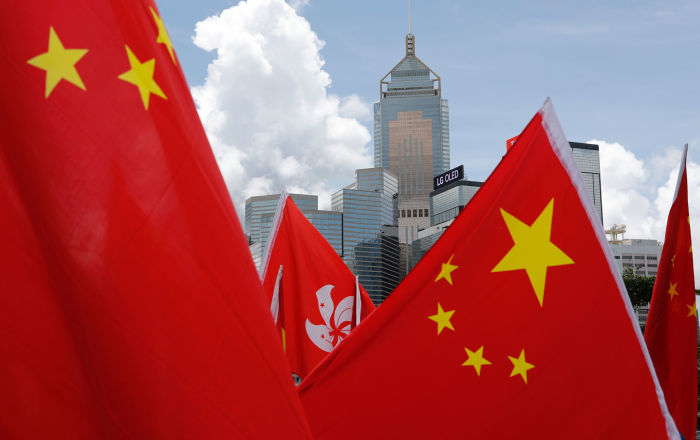 China has threatened to retaliate following the United States’ decision to strip Hong Kong of its special status amid a spike in tensions over a new security law.

Chinese Foreign Ministry spokesman Zhao Lijian did not elaborate on the possible steps Beijing would take in making the announcement on Tuesday.

“US attempts to obstruct China advancing the Hong Kong national security legislation through so-called sanctions will never prevail,” he told a press briefing, adding that “China will take necessary countermeasures”.

The Hong Kong-based newspaper SCMP and broadcaster RTHK report that Chinese lawmakers have unanimously approved the law, which China says is meant to safeguard national security, but many in Hong Kong fear will encroach on the territory’s unique freedoms.

The political party Demosisto, which has advocated for self-determination in Hong Kong, disbanded shortly after the reports emerged.

The law was passed a year after the start of mass anti-government protests in the Asian financial hub, which has a separate legal framework and governance from mainland China under the “one country, two systems” principle, an arrangement that is set to expire 2047.

The security law, which criminalises secession, subversion, terrorism and collusion with foreign powers in Hong Kong, was viewed critics in Hong Kong and in the West as an attempt Beijing to take full control over the semi-autonomous territory.

China insists that the law is meant to target a small number of “troublemakers” and will neither affect civil rights nor freedoms, nor will it threaten investor interests. The Beijing government has stressed repeatedly that it views criticism of its Hong Kong policy and related sanctions as interference in its domestic affairs.

In line with President Trump’s threat to remove Hong Kong’s preferential status in response to the law, the US  on Monday announced that it was ending exports of US-made defence equipment to Hong Kong and restricting the territory’s access to high-tech products.

Last year, the US government greenlighted the export of $2.4 million worth of controlled defence products and services to Hong Kong,of which about $1.4 million was actually shipped, according to US officials.

Secretary of State Mike Pompeo also said last week that visa restrictions would be imposed on current and former Chinese officials who were “responsible for, or complicit in, undermining Hong Kong’s high degree of autonomy”.

China on Monday announced tit-for-tat visa restrictions on US personnel who have “behaved egregiously” in relation to Hong Kong.