The children hang over the balcony railings on Sunday morning, parents clutching on to their coat collars to keep them from tumbling over. In the parking lot below, a four-person band test microphones and practise harmonies.

A moment later, the group break into an upbeat chorus, filling the Mirema apartment complex in Nairobi with music: “I’m happy today, so happy. In Jesus’s name, I’m happy.”

The Rev Paul Machira, a tall, slender beanpole of a man with greying hair, leaps around energetically, encouraging the balcony worshippers to join in prayer. Sporting green overalls embroidered with his nickname, Uncle Paul, the 43-year-old has been traveling around apartment complexes across Nairobi, bringing his balcony services and Sunday school to families since the Covid-19 pandemic closed down places of worship in Kenya on 22 March. 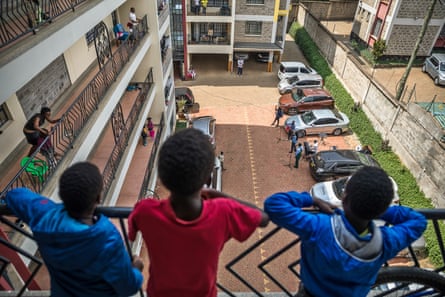 Worshipping from the balcony in Nairobi. Photograph: Brian Otieno/The Guardian

Machira has served at the 103-year-old Anglican All Saints Cathedral in Nairobi for the past year. He followed in the footsteps of his father, also an Anglican priest. Machira says he is dedicated to bringing the word of God to children, and styles himself as a “children’s pastor”.

“I grew up always wanting to be the guy that makes children very, very happy. For them to really enjoy church,” Machira said.

At Mirema Apartments, Machira and his band, which include a knockout female vocalist, an electric guitarist and a keyboard player, bring cheerful church music to an otherwise tranquil neighbourhood. Pairing dance moves with their tunes, the band encourage children and their parents to spend the hour dancing and praying together. When Machira realises that a crowd has gathered on the balcony of the apartment building next door, he shifts to a “360 service” to include those neighbours. 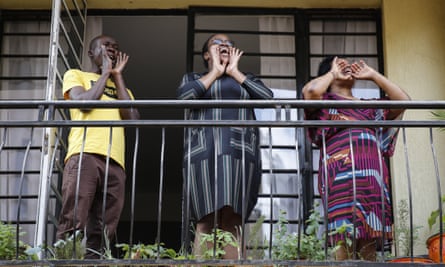 The balcony church started when a Sunday school teacher at the cathedral delivered a service to children on their balconies to entertain them while they were stuck at home. The service was a success, and the teacher enlisted Machira’s help to spread this mtaani – “in the neighbourhood” in Swahili – Sunday school. While All Saints Cathedral has been providing online services for young people, Machira says the mtaani helps him reach more of them.

Soon after its first Covid-19 case was announced in mid-March, Kenya closed down schools. “You’ll find children being confined in their houses from the time they wake up till the time they go to bed,” said Machira, who has three children himself. “It’s been a difficult time.”

A night-time curfew and a ban on county-to-county travel has slowed down Kenya’s economy, and many of Machira’s parishioners are hurting economically.

“Some members of our congregation have lost an income,” said Machira. “Some have been retrenched from their places of work. Others are in business. Business is doing not as well as it was before Covid.”

Alexander Odhiambo, a resident of Mirema Apartments, has a two-year-old, Helen, and a ba on the way. Throughout the balcony service, he dances with Helen. The founder of Solutech Ltd, which provides custom software solutions, Odhiambo has seen his clients cutting their sales staff and even closing down because of the Covid-19 pandemic. 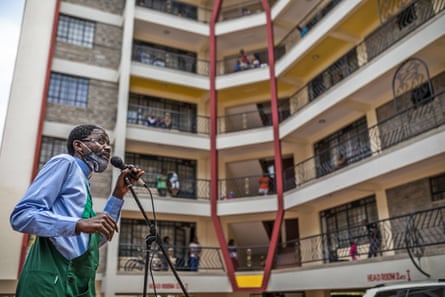 “It’s been stressful,” said Odhiambo. “We had [at one point] considered even having cuts, reducing our pay, so at least we can survive for a longer period. And … you don’t even know how long this is going to last. Who else is going to call you [to say], ‘This thing is now taking a toll on us. We want to reduce on what we pay you.’”

Machira’s services are invitation only. He says that the group have had to skip services because some of the neighbours have objected to “noise-makers” in their complex. Odhiambo decided to be Machira’s “host” in his block, but only after ensuring that all of his neighbours were comfortable with the service.

“It brought down the tension,” said Odhiambo. “Even the adults actually enjoy it together with their children. Just coming out with family to fellowship.”

Machira’s group have been booked for as many as four services in one day before. This popularity means that they sometimes have to split into two, renting an additional van and musical equipment to cover more ground. Machira and his colleagues provide the services for free, but it costs them in fuel and equipment rental.

Around 84% of Kenyans are Christian, and the closing of churches in a highly religious country has been controversial. Kenya has nearly 5,000 confirmed cases of Covid-19 with numbers rising, but as restaurants and other services have slowly begun to reopen, some Kenyan activists and religious leaders have been lobing the government to allow places of worship to resume services. CitizenGO Africa, an ultra-conservative advocacy organisation, has created a petition addressed to Kenya’s health and interior ministries. 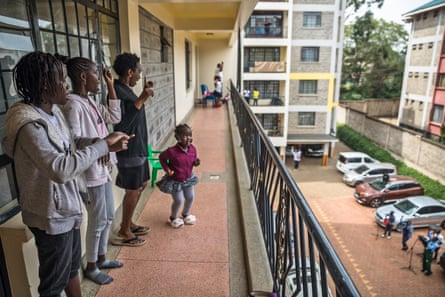 “The government needs to trust the church to being smart enough to put in place the necessary measures and obeying the guidelines as they restore the most needed worship in the country,” the petition, which so far has 29,000 signatures, reads.

The government has assembled a committee of faith leaders to develop guidelines to help all kinds of houses of worship safely reopen amid the pandemic, but no reopening date has yet been set.

While Machira misses the human interaction of his normal congregations, and wishes “churches never closed”, he acknowledged: “The threat of Covid is real.” The senior pastor of All Saints has had the virus himself and believes it would be irresponsible for the church to reopen until the pandemic has waned.