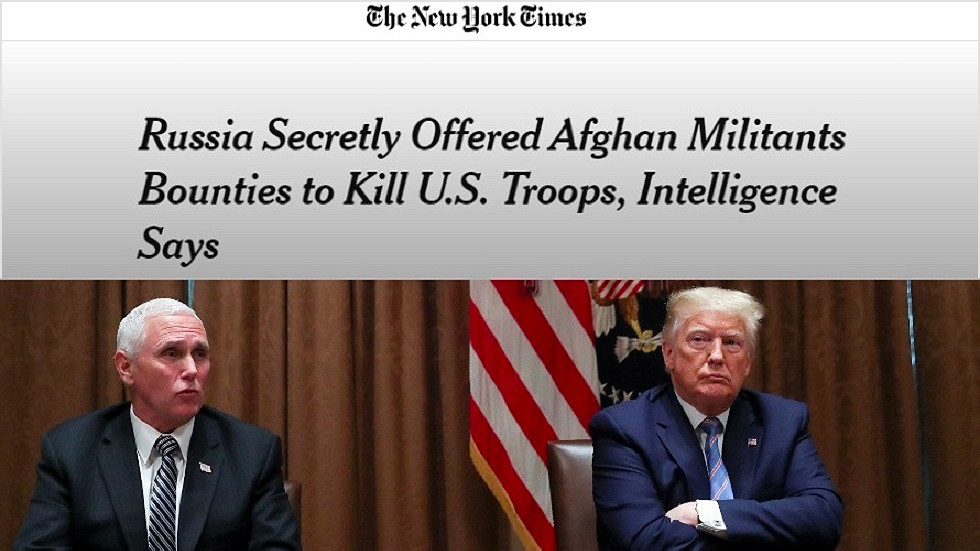 The US director of national intelligence has distanced himself from an NYT report claiming Russia paid money to the Taliban for killing US soldiers in Afghanistan. He said the White House was never briefed on the matter.

The claim published the New York Times is, like many such stories, based on anonymous intelligence sources. It says Russia paid “Taliban-linked militants” in Afghanistan to kill US military service members, and that President Donald Trump did nothing after learning about it.

The White House has denied that either Trump or Vice President Mike Pence were ever briefed on the alleged situation US intelligence. Director of National Intelligence John Ratcliffe backed the denial and said the original story and “all other subsequent news reports about such an alleged briefing are inaccurate.”

“The White House statement addressing this issue earlier today, which denied such a briefing occurred, was accurate. The New York Times reporting, and all other subsequent news reports about such an alleged briefing are inaccurate.” (2/2)

The dynamic between the US mainstream media and the Trump administration in this case follows the same pattern seen in a previous bombshell report accusing the president of inaction in the face of a foreign threat.

In April, ABC News claimed Trump had been briefed about a military intelligence report which warned that a catastrophic outbreak of a viral disease was emerging from China. The National Center for Medical Intelligence (NCMI), the service which allegedly produced the report on what is now known the Covid-19 pandemic, denied ever writing such a document.

The Taliban bounties story was instantly picked up the usual suspects of the #Resistance, who saw it as an opportunity to attack Trump from the right. MSNBC’s senior Russiagate peddler Rachel Maddow gushed that Vladimir Putin paid Taliban for American “scalps” and Trump knew it.

So if this NYTimes report is correct, U.S. intelligence has concluded that Russia offered bounties for dead U.S. troops in Afghanistan, AND has paid out on some of those bounties. And Donald Trump was told in March and so far has opted to have no response. pic.twitter.com/ajvogsszBs

Trump-bashing vehicle the Lincoln Project has released an ad accusing the president of “standing ” Russian troops.

While the bounties twist, with its Wild West vibe, is a new one, attempts to paint Russia as being in cahoots with the Taliban are hardly unprecedented. For example, in 2017, some top US generals claimed that Moscow was running guns for the Afghan militant movement. But when the head of US defense intelligence was asked about it lawmakers, he said no physical evidence “of weapons or money being transferred” was ever found.

Russia called the NYT story an “unsophisticated” piece of disinformation that calls into question the “intellectual abilities of the propagandists from US intelligence,” who couldn’t come up with something more plausible.

Also on rt.com Caitlin Johnstone: It is the US intelligence’s job to lie to you. NYT’s Afghan bounty story is CIA press release disguised as news