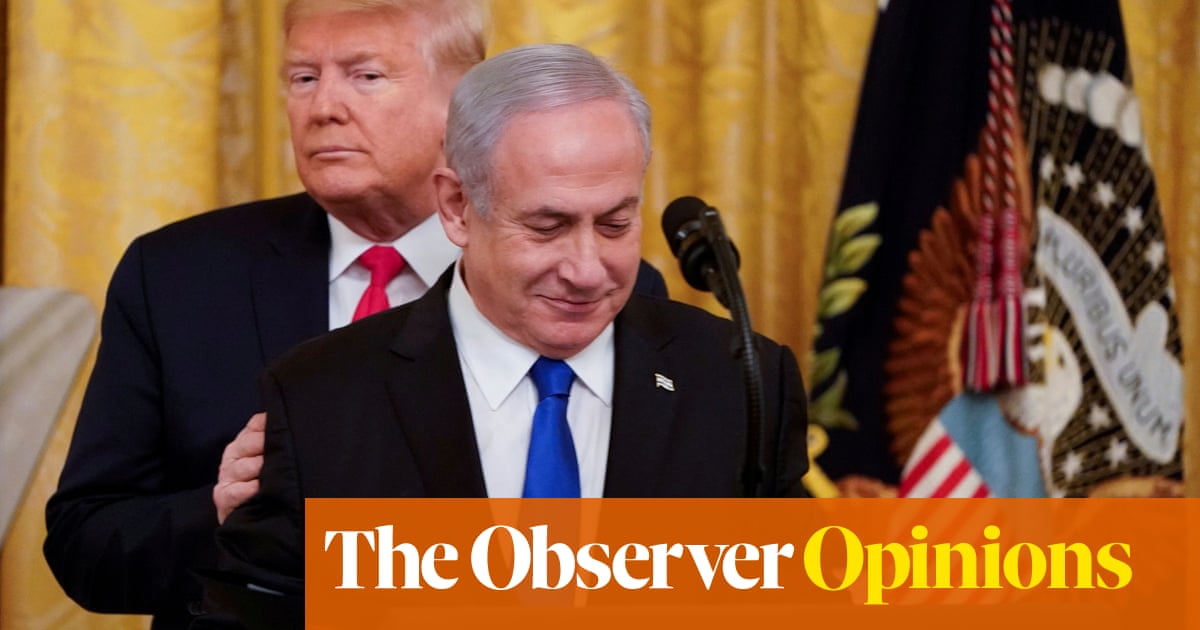 It was always about land. Arabs possessed it, Jews claimed it. Both believed they were in the right. Since the 1930s, when the flight from fascism in Europe trebled the Jewish population of Palestine to 33%, this elemental, foundational struggle has intensified inexorably – with Israelis gaining ground time after time. Now Benjamin Netanyahu, prime minister and co-leader of a powerful 74% Jewish majority state, wants to finish the job.

Netanyahu’s plan is to annex large parts of the West Bank and the Jordan valley, but his starting date of 1 July may slip amid disagreements with the US and internally over its scope and pace. Last week, Jordan’s King Abdullah described annexation as “unacceptable” and threatened to slash diplomatic ties. Hamas militants in Gaza called the plan a “declaration of war”.

Although Netanyahu appears determined to push ahead, it is hard to see an upside to his plan, which is illegal under international law. It will mortally wound the Palestinians. But it could also damage Israel, regional stability and the international community, which has wrestled in vain with the Israel-Palestine conundrum since Britain backed a “national home for the Jewish people” in 1917. Netanyahu’s “sovereignty extension” will make a just outcome even harder to achieve. While he disputes that, it’s clear he is exploiting a large hole where an active, impartial peace process should be. For Palestinians, annexation would be a death sentence for their elusive vision of a viable independent state, the final tragedy in a saga of dashed hopes and broken promises.

All these are reasons for dropping the plan. But from this conflicted arena, reason and good sense are frequently absent. Once again, but perhaps for the last time, the Palestinians face being abandoned. Many Israelis oppose annexation, while Netanyahu’s coalition partners appear uncertain. Israel already controls this territory, occupied during the 1967 war. So why risk multiple negative consequences? To some it smacks of a vainglorious legacy project Netanyahu and his chief sponsor, Donald Trump, who may both be out of office soon.

Given the pivotal role the Israel Defence Forces would play in implementing the plan, the views of 220 former senior commanders of the IDF, the police, and the Mossad and Shin Bet security agencies carry weight. They have jointly called on Israel to adhere to the UN-backed two-state route, which they describe as “essential for Israel’s security” and its democratic future.

Sharp disagreements at home are mirrored abroad. Annexation is under fire from British and American Jews. European parliamentarians and governments are unhappy, too. There is talk, albeit unconvincing, of sanctions and formal diplomatic recognition of a Palestinian state. But, like US Democrats and Republicans, the EU is split down the middle. Conservatives in Hungary, Poland and Austria are more sympathetic to Netanyahu’s ideas than western Europeans. While they still support the post-Oslo peace process, governments in France, Britain and Germany know it is all but moribund.

European leaders are torn. They fear annexation could further destabilise the region, spark a rise in antisemitic attacks, and be used to justify Russia’s 2014 Crimea land grab. But they also fear a transatlantic split over Trump’s much-vaunted, hopelessly unbalanced “peace plan” that endorses annexation.

It’s no exaggeration to say the issue poses an existential dilemma for the UN, long-time champion of a two-state solution. Its secretary-general, António Guterres, warned last week that annexation would constitute “a most serious violation of international law”. Sadly, it would also violate the UN’s ever more brittle credibility.

As he spoke, Mike Pompeo, US secretary of state, was insisting any move was solely Israel’s decision. His stance, consistent with US undermining of joint UN positions on Iran, climate change and coronavirus, was further evidence of the Trump administration’s contemptuously destructive unilateralism – and an indication that it will back Netanyahu almost whatever he does.

Arab countries are in a fix, too. Jordan and Egypt have peace treaties with Israel predicated, in part, on a solution in Palestine. Will they now recoil and, for example, cease counter-terrorism border cooperation? Public opinion may insist on it. But Egypt’s president-dictator relies on US goodwill, aid and weapons. He is not known for heeding the popular will.

It smacks of a vainglorious legacy project Netanyahu and Donald Trump, who may both be out of office soon

A developing regional split follows familiar lines. Iran, Qatar and Turkey back Hamas in Gaza and trumpet the Palestinian cause, while the Saudis, UAE and “moderate” Arab states take their cue from Washington. Countries such as Lebanon and Iraq are caught in the middle. Iran hopes annexation will wreck Israel’s informal anti-Tehran Arab alliance. There is no unified view.

As for the Palestinians, divided as ever, what can they do? Talk of a new intifada appears overdone. There’s no sign yet of surging anger on the Arab street. Retaliatory moves against Israel, such as ending security coordination, may backfire. The Palestinian Authority could collapse. Hardliners would be glad of that. They accuse its president, Mahmoud Abbas, of de facto collaboration with the Zionist project.

An obvious danger, if Netanyahu goes ahead with even a partial, phased annexation, is that Islamic Jihad and Isis extremists will exploit the resulting, violent polarisation and dislocation. In such circumstances, the IDF could be ordered to conquer all of the West Bank and Gaza all over again, imposing an apartheid-like system on a disenfranchised, unrecognised and captive people.

In his new book, An Army Like No Other, Haim Bresheeth-Zabner suggests that a fatal conflation Jewish leaders of territorial settlement with territorial conquest prefigured the 1948 Nakba (catastrophe) and ensuing Palestinian mass exodus at the close of the British mandate. With the two peoples still disputing a shared land many decades later, a second cataclysm looms.