Major – the photogenic life-sized bronze bull statue that presides over a square near the center of downtown Durham, North Carolina – hasn’t had much company in recent weeks.

With the number of coronavirus cases, hospitalizations and deaths in the state all trending upwards, many businesses up and down Main Street remain closed, while others operate in a limited capacity. Some storefronts have been boarded up following recent Black Lives Matter protests, with the plywood covered in graffiti art. “People were crying before the teargas,” one read.

Outside Pour Taproom on Thursday evening, several groups sat sipping drinks at red metal tables spaced strategically apart. The pour-it-yourself taproom reopened last week, and since has seen a solid, if unspectacular, stream of patrons. Anjelika Vasquez, the Taproom’s manager, said many had felt “cooped up in the house”.

“It’s such a weird period,” she said. “But people want to drink.”

Under North Carolina’s current set of rules, restaurants, breweries, retail stores and salons are allowed to open at 50% capacity. Gyms and bars are closed, with wiggle room for pubs that serve food. Gatherings are limited to 10 people indoors and 25 outdoors.

The Taproom halved its staff and reduced its hours, along with adding sanitizing stations and selling face masks. While the moves have bought the business some time, Vasquez said she’s wary about the future.

“Everybody is getting really impatient and small businesses are suffering,” she said. “But I have a feeling we’re going to have to close again.”

On Wednesday, a day after the state hit a new high in Covid-19 hospitalizations, the Democratic governor, Roy Cooper, announced North Carolina would remain in the second phase of its three-phase reopening plan, a decision that was swiftly condemned as anti-business many in the state’s Republican-dominated legislature.

Phase two was scheduled to end Friday, but Cooper, who also announced a mandate requiring individuals wear masks in public despite fierce opposition in some quarters, said he was “concerned” about the direction the state is trending.

“The numbers we see are a stark warning,” the governor said. “We’re adding this requirement because we don’t want to go backward.” 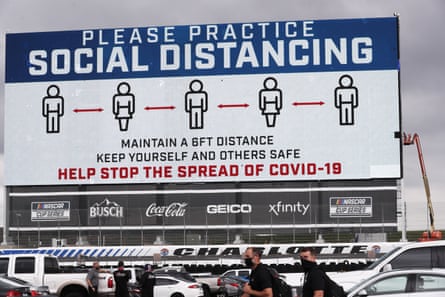 A screen displays a message urging social distancing before a Nascar race in Concord, North Carolina, on 25 May. Photograph: Gerry Broome/AP

The announcement was met with furor from industry groups.

“The governor’s decision is effectively signing a death warrant for 1,063 bars across North Carolina while offering zero relief to the small-business owners or their employees,” Zack Medford, president of the North Carolina Bar and Tavern Association (NCBATA), said in a release. “Asking private bar owners to lose everything they’ve worked for while their competitors can thrive is unconscionable.

On 4 June, the NCBATA filed a lawsuit against the state on behalf of more than 185 bars, alleging that the Cooper’s office violated the businesses’ constitutional rights “irrationally treating [bars] differently from restaurants, hotels, wineries, distilleries, taprooms, brewpubs, breweries, private clubs and eating establishments”.

But for the past several weeks, the state has failed to hit its self-imposed benchmarks for reopening. In addition to a steady increase in hospitalizations – culminating in the record high 915 on Tuesday – North Carolina saw 1,721 new cases Wednesday, its second-highest daily total since the pandemic began.

“We used to be rock solid in the mid-500s of the total number of hospitalizations. We’re now in the 900s and that trend continues to go up,” Mandy Cohen, the state’s health and human services secretary, said this week.

About 9% of tests performed are coming back positive, a number that has also failed to dip. One of the only metrics that has dropped has been tests performed, with the state Department of Health and Human Services citing a renewed shortage of testing reagents.

The Republican-controlled state general assembly has generally fought Cooper’s reluctance to reopen, passing a handful of bills that would relax restrictions on bars, gyms, bowling alleys and amusement parks. Cooper vetoed at least two of these bills.

Many of North Carolina’s first hotspots were focused near its population centers, such as Charlotte, Raleigh and Durham. But in recent weeks the spread has moved into less populated areas and heavily impacted Hispanic, Black and indigenous communities, particularly those working in food processing facilities and on farms.

The virus’s movement from urban to rural areas was predictable, said Lori Carter-Edwards, an associate professor at the University of North Carolina Gillings School of Global Public Health, and is underscoring the conflicted relationship between the economy and public health across the state.

Without proper safety nets in place – namely in areas with fewer resources – governments and businesses will continually be forced to choose between financial stability and public health, she said.

“Both decisions are tough, but if we can’t make the health decision when the science tells us what it tells us we will be dealing with this much longer and will be the nation that didn’t do what it could have done,” Carter-Edwards said. “And that will be a travesty.”

As it stands, congregate living facilities, daycare centers and schools are the only facilities required the state to report outbreaks, which it defines as two or more cases. For all other businesses, local health departments and, extension, the state department of health and human service (DHHS), depend on companies volunteering their own data or tracking down clusters through case interviews.

“It is in the best interest of public health for those private businesses to self-identify and work with NCDHHS so that we can help protect employees and communities providing technical assistance on mitigation strategies, educating employees about the virus and measures they can take, and providing testing for those who have been exposed as well as for others in their households,” a DHHS spokesperson wrote.

North Carolina is set to reassess its reopening strategy when the current order expires on 17 July, and Carter-Edwards said the next three weeks represent a critical window for the state to coordinate a response to its rising numbers.

“People need to understand the war is not against an individual,” she said. “Until we learn how to work together, be bipartisan and treat this as a collective public health [issue], we won’t be able to hit our plateau. We’ll miss the mark, we’ll have more deaths and we’ll have more cases.”