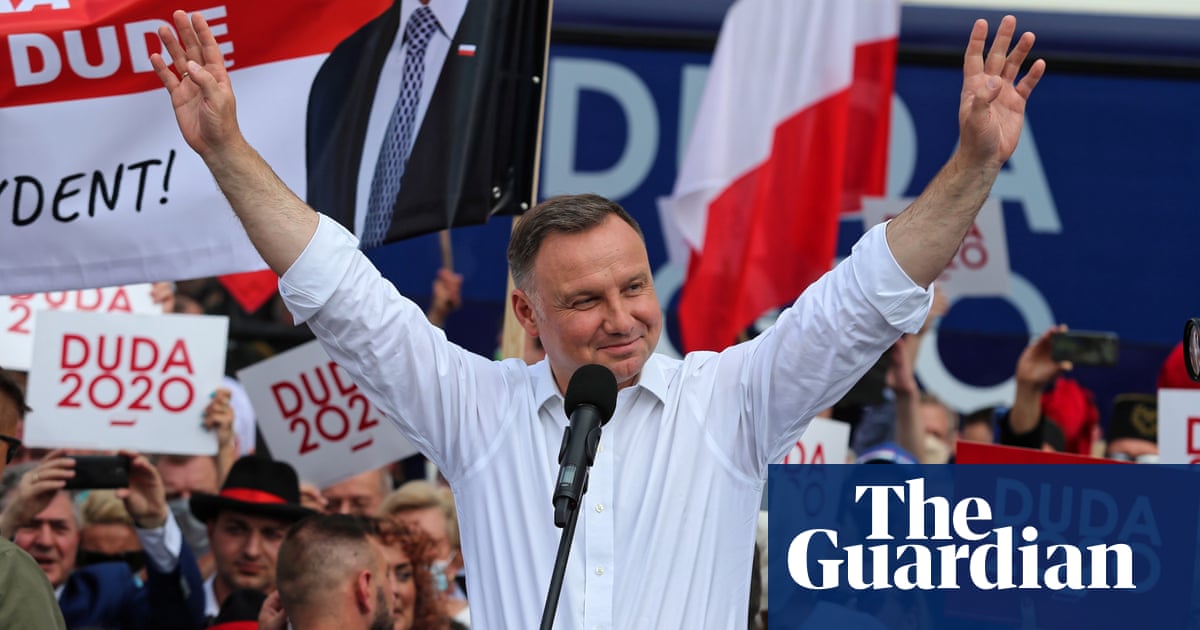 Poles will vote on Sunday in a postponed presidential election that will determine whether the ruling rightwing populist party continues to have full control over the country’s political system.

Andrzej Duda, an ally of the ruling Law and Justice (PiS) party, is standing for re-election in a crowded field of candidates, with the closest challenger expected to be Rafał Trzaskowski, the liberal mayor of Warsaw.

Polls suggest Duda will win the first round comfortably but without the 50% backing required to avoid a run-off against the second-placed candidate. In a two-way race between Duda and Trzaskowski, the electorate would be evenly split, the polls indicate, with just a few thousand votes potentially making the difference.

The presidency has an important blocking role, and should Trzaskowski win he would be able to frustrate much of the PiS legislative agenda, dramatically changing the political landscape.

PiS, which has ruled Poland since 2015, won a second term in power in parliamentary elections in October. It has combined a socially conservative agenda with attacks on the rule of law, causing friction with the EU. It draws much of its support from rural areas and small towns.

Trzaskowski, of the Civic Platform party, which governed Poland prior to the PiS victory in 2015, has campaigned under the slogan “We have had enough” and promised a more inclusive and tolerant form of politics. “It’s time to say no lies and propaganda, and to fight for sincerity,” he told a crowd in the city of Wrocław while on the campaign trail.

A source in his camp said Trzaskowski would be willing to cooperate with PiS if he won, but only if the government acceded to key demands such as reform of public television, which has functioned as a campaign booster for Duda in recent weeks.

The election was meant to take place in May but was postponed due to the coronavirus pandemic. Since then, Duda’s commanding lead in the polls has steadily dwindled, leading to an increase in homophobic rhetoric from his campaign in an attempt to boost support in the Catholic conservative PiS heartlands.

Public television and PiS-friendly media outlets have attacked Trzaskowski as an “extremist candidate” over his support for LGBT rights during his time as mayor.

Duda unveiled a campaign pledge to “defend children from LGBT ideology” and has even compared the so-called “ideology” to communism. Przemysław Czarnek, a PiS MP and member of Duda’s campaign team, said: “Let’s stop listening to these idiocies about human rights. These people are not equal with normal people.”

Duda later attempted to row back from some of the more extreme rhetoric after it appeared to be doing him more electoral harm than good. Instead, his team hoped that an endorsement from Donald Trump would give him a last-minute lift. Duda travelled to Washington on Wednesday for a meeting at the White House, becoming the first head of state Trump has received since the start of the pandemic, in a surprisingly brazen endorsement of Duda just days before the election.

In the end, Duda left the US with friendly words from Trump that the meeting would “reaffirm our vital alliance” but almost nothing in the way of concrete commitments that he could sell at home.

Duda’s administration had hoped that Trump would announce an increase in the US military presence in Poland, a move that would have been popular among large numbers of Poles who are wary of the threat from Russia and generally pro-American. Instead, Trump merely hinted that some of the troops he has threatened to withdraw from Germany could be stationed in Poland, without making a firm commitment.