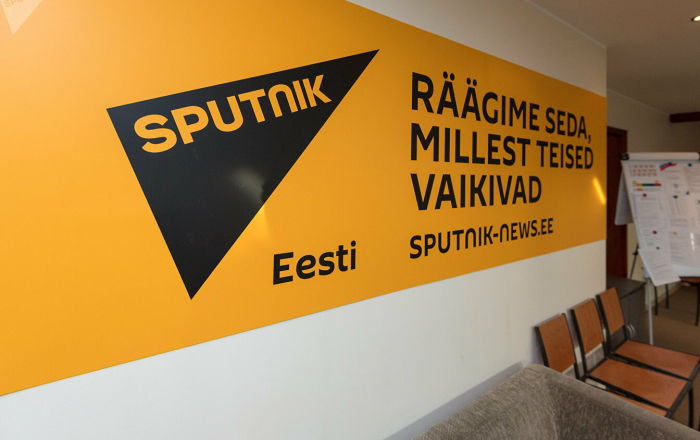 On Friday, Rossiya Segodnya, the Moscow-based parent agency of Sputnik, received a reply to its January letter to UNESCO concerning the situation around Sputnik Estonia journalists, who had been forced to shut down their office in the Baltic country. The UN specialized agency said that it would continue defending the press’ rights to obtain and distribute information.

In a comment to Sputnik, Vyshinsky said that this letter from Moez Chakchouk, UNESCO’s assistant director-general for communication and information, “frankly surprised and, to some extent, even outraged us”.

“The thing is that we did not expect any sharp reaction from UNESCO, because we are well aware of the … nature of this organization and the diplomatic style of its representatives. But on the other hand, what we did not expect at all is to receive in reply vague words about the commitment to freedom of speech almost six months after our meeting and conversation at UNESCO”, the journalist said.

According to Vyshinsky, the letter gives reasons to point to double standards applicable to journalists working for and cooperating with Russian media outlets.

“The letter that we received from UNESCO has become another confirmation that freedom of speech in Europe is no longer considered a value that one can fight for and defend with regard to all journalists, regardless of their media affiliation and a country of origin of the media”, Vyshinsky added.

Sputnik Estonia staffers were forced to terminate their contracts starting 1 January, after receiving threats of jail terms of up to five years from Estonian police, which cited the 2014 EU sanctions, imposed on Dmitry Kiselev — the head of the Rossiya Segodnya International Information Agency — as the grounds for prosecuting the outlet’s employees. However, the outlet itself has not appeared on any sanctions lists.

In connection with the situation, Rossiya Segodnya has appealed to UNESCO and the Organization for Security and Co-operation in Europe, as well as reporters’ rights groups. The OSCE representative on freedom of the media, Harlem Desir, in particular, urged Tallinn to “refrain from unnecessary limitations on the work of foreign media that can affect the free flow of information”. Desir also stated that individual EU sanctions on Kiselev could not be extended to Sputnik Estonia journalists.