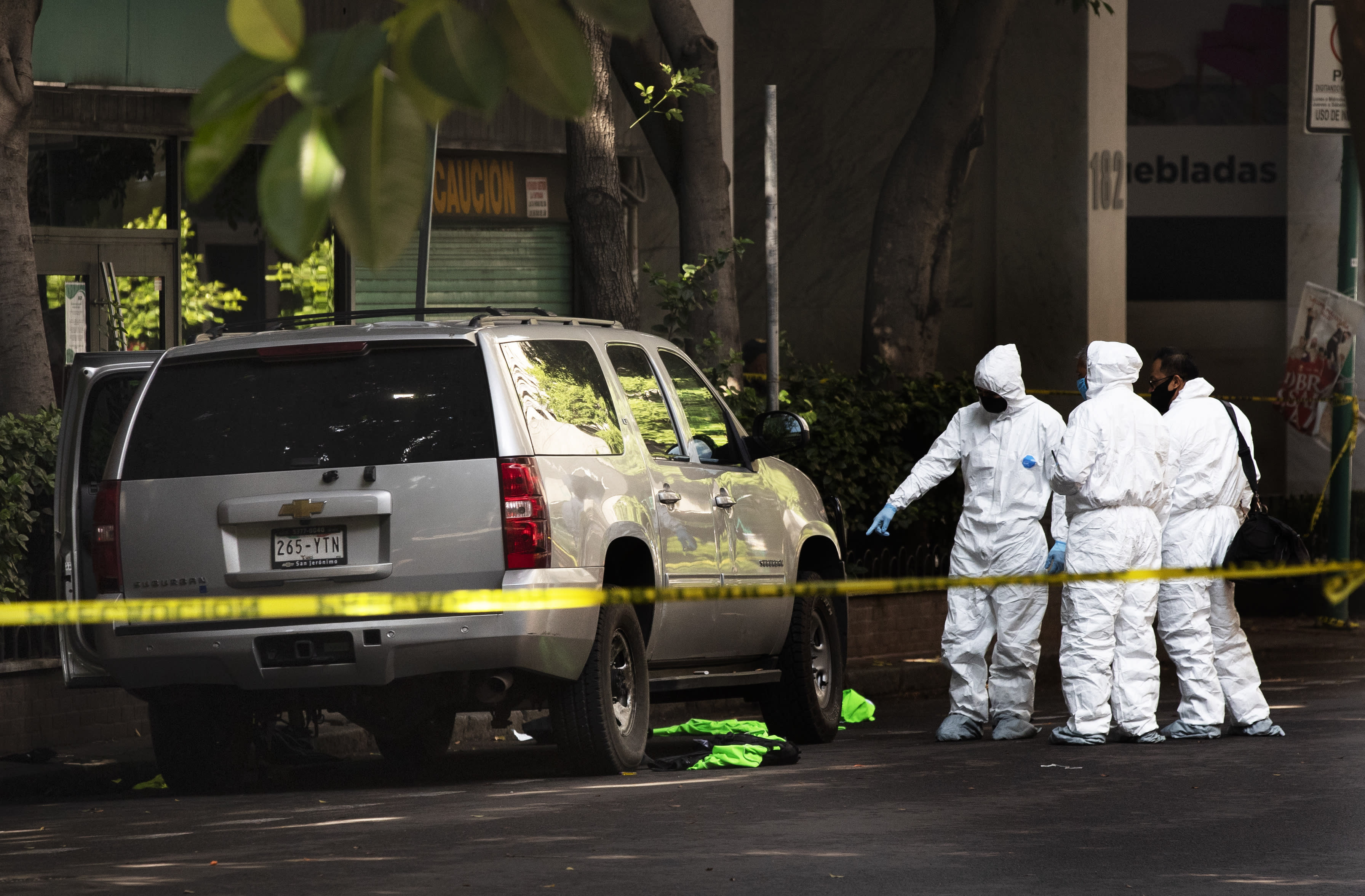 Forensic investigators work in the area where an abandoned vehicle that is believed to have been used gunmen in an attack against the chief of police is sealed off with yellow tape, in Mexico City, Friday, June 26, 2020. Heavily armed gunmen attacked and wounded police chief Omar Garcia Harfuch in a brazen operation that left an unspecified number of dead, Mayor Claudia Sheinbaum said Friday. (AP Photo/Marco Ugarte)

MEXICO CITY (AP) — Dozens of gunmen believed tied to the hyper-violent Jalisco New Generation Cartel deployed for a complex, multi-point dawn ambush meant to kill Mexico City’s police chief, unleashing one of the most brazen attacks in Mexico since the equally ruthless Zetas carved a path of terror across the country nearly a decade ago.

The attackers used grenades and a .50-caliber sniper rifle to assault the chief’s armored vehicle early Friday and killed two of the his bodyguards and a woman driving . Police chief Omar García Harfuch was shot in the shoulder, collar bone and the knee but was reported out of danger.

He called the attack “cowardly” and blamed it on the Jalisco cartel, which has established a nearly national presence, from the white-sand beaches of Cancun to Mexico City and the country’s most important ports, as well as in key border cities traditionally controlled other cartels.

Police officers who converged on the scene on the capital’s iconic Paseo de la Reforma boulevard in the upscale Lomas neighborhood rounded up a dozen of the shooters, who were hauled off for questioning, authorities said.

Later Friday, capital police arrested an alleged head of Jalisco New Generation hitmen, suggesting he could have been the mastermind of the attack, said a Mexico City police official who was not authorized to be quoted name.

The official said police arrested José Armando Briseño on the east side of the city. Nicknamed “Cow,” he is allegedly the gang’s chief of hitmen in the city of Tonalá inJalisco.

The attack on the police chief was meticulously planned and involved a total of 28 gunmen hired three weeks before, said Ulises Lara, the spokesman for the Mexico City prosecutors office. Three separate possible ambush points were set up on major thoroughfares, including one — which wasn’t used — in the heart of Mexico City, one block from the Independence Monument.

The gunmen were divided into four different cells, and they received ski masks and weapons Thursday night. They were taken to the ambush points at 4 a.m. to lie in wait for their target. They jumped from a truck and opened fire when Garcia’s convoy attempted to pass.

Lara said that of the suspects detained, one is Colombian and the other 11 are Mexicans from the capital and five states — Jalisco, Guerrero, Nayarit, Chihuahua and Michoacan.

It was the second high-profile attack just this month, following the shooting death of a federal judge and his wife, bringing uncomfortable comparisons to Colombia’s drug wars of the 1980s and ’90s in which drug traffickers routinely targeted judges and police for assassination.

Mexico targeted and dismantled the Zetas cartel after it killed migrants, unsuspecting citizens and officials from 2010 to 2013. But it remains to be seen whether the government will go after the Jalisco cartel they way it did the Zetas.

“If they (Jalisco) are not made a priority target after this, I don’t know what is happening, something is wrong with the strategy” of the government, said security analyst Alejandro Hope.

With the Zetas, Mexico used elite military units and worked closely with the United States to go after the cartel. But now, amid budget cuts and President Andrés Manuel López Obrador’s policy of not directly confronting the cartels, it is unclear whether the government has the will or ability to fight Jalisco, especially in the middle of the coronavirus pandemic.

“This kind of attack is not normal, they crossed a line. You have to read it like an exceptional act,” said Hope. “You have two very serious attacks in two weeks.”

It was unclear whether the attack was related to recent crackdowns on Jalisco-affiliated gangs in Mexico City or to the police chief’s earlier work in federal investigations.

García, 37, is a former head of the Federal Police investigation division and in 2016-2019 he led the branch of the federal Attorney General’s Office that oversees investigations and arrests of organized crime members. Before being named Mexico City police chief, he spent several months as the mayor’s intelligence coordinator.

Jalisco is the same gang that U.S. prosecutors said tried to buy belt-fed M-60 machine guns in the United States and that once shot down a Mexican military helicopter with a rocket-propelled grenade. In October, the cartel’s gunmen ambushed and killed 14 state police officers in Michoacan.

Friday’s attack came two weeks after rumors swirled for a day that Jalisco’s leader, Nemesio Oseguera Cervantes, better known as “El Mencho,” had been captured or killed — though officials later denied that. Oseguera is the U.S. Drug Enforcement Administration’s most-wanted fugitive, with a $10 million price on his head.

In March, U.S. authorities arrested hundreds of Jalisco operatives in raids across the United States. They said the gang controls between one-third and two-thirds of the U.S. drug market.