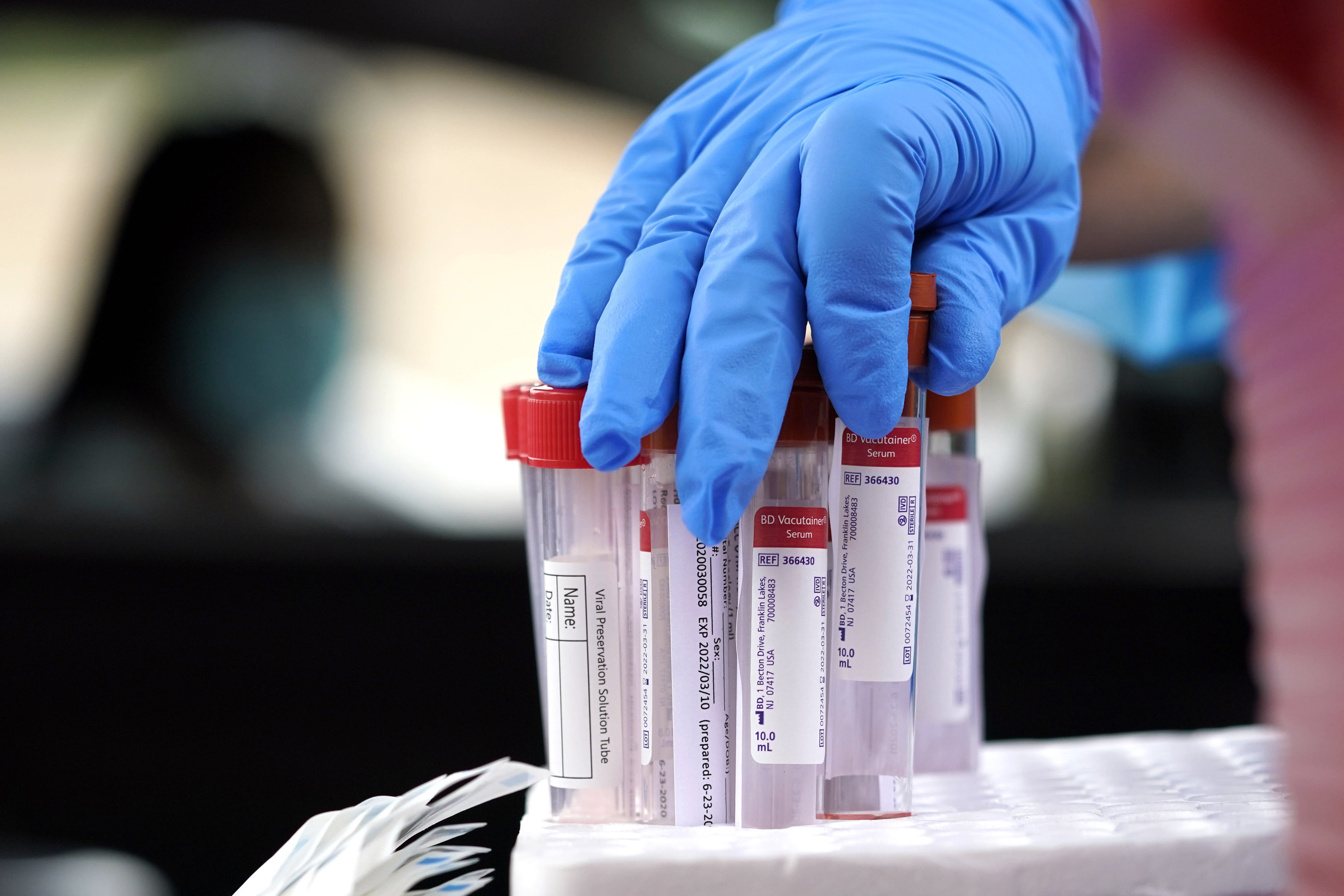 So it went over the past week as America’s reckoning with disease and racism navigated a fog of falsehoods and distortions from the president. A sampling:

TRUMP: “You know testing is a double-edged sword. … Here’s the bad part. When you test to that extent, you are going to find more people, find more cases. So I said to my people, ‘Slow the testing down please.‘” — Tulsa, Oklahoma, rally June 20.

THE FACT: First, it’s not true that he ordered testing slowed. The government’s top public health officials testified one one to Congress that Trump told them no such thing.

White House press secretary Kayleigh McEnany said the comment was “made in jest” and other senior aides similarly brushed it off as not serious. Trump didn’t play along. “I don’t kid,” he said Tuesday when asked about the remark.

Then he reversed himself, telling Fox News on Thursday “Sometimes I jokingly say, or sarcastically say, if we didn’t do tests we would look great.” But holding back on testing is “not the right thing to do.”

Trump’ broader point — “If you don’t test, you don’t have any cases,” he also said — flips science on its head. No one disputes the fact that testing for the virus is key to controlling it. Testing is only one measure of the pandemic. It is also measured hospitalization and death, which continue even if authorities were to close their eyes to spreading sickness.

COVID-19 has killed about 125,000 people in the U.S. Infections are far higher than are known because many who get the disease and pass it on are not tested.

THE FACTS: No there isn’t.

Voting fraud actually is rare and Trump’s attempts to show otherwise have fallen flat. Nevertheless, he persists in the assertion, in what can be seen as a pretext to discredit results if he loses in November.

Trump appointed a commission after the 2016 election to get to the bottom of his theory that voting fraud is rampant. The panel disbanded without producing any findings.

Some election studies have reported a higher incidence of mail-in voting fraud compared with in-person voting, but the overall risk is all but imperceptible. The Brennan Center for Justice said in 2017 the risk of voting fraud is 0.00004% to 0.0009%.

Richard L. Hasen, an elections expert at the University of California, Irvine School of Law, recently wrote in an op-ed that “problems are extremely rare in the five states that rely primarily on vote--mail, including the heavily Republican state of Utah.”

Trump himself voted mail in the Florida Republican primary in March. A half-dozen senior advisers to the president have also voted mail, according to election records obtained The Associated Press.

THE FACTS: He has no such authority. A president is not a judge.

TRUMP: “I have authorized the Federal Government to arrest anyone who vandalizes or destroys any monument, statue or other such Federal property in the U.S. with up to 10 years in prison per the Veteran’s Memorial Preservation Act, or such other laws that may be pertinent. … This action is taken effective immediately, but may also be used retroactively for destruction or vandalism already caused. There will be no exceptions!” — tweets Tuesday.

THE FACTS: This action taken “immediately” and “retroactively” is merely words. It has no effect.

The Veterans’ Memorial Preservation Act, passed Congress in 2003, already authorizes fines or prison for up to 10 years for the destruction of veterans’ memorials on public property.

The law covers “any structure, plaque, statue, or other monument on public property commemorating the service of any person or persons in the armed forces of the United States.”

So all prosecutors got from Trump is a reminder of legal authority they already had.

THE FACTS: No one damaged the memorial housing the statue of Lincoln in protests that unfolded near it. An online photo seeming to show the Lincoln statue and a memorial wall blanketed graffiti was fake.

The reality: Someone spray painted “y’all not tired yet?” the bottom of the steps to the memorial May 30 and the National Park Service cleaned it up.

“The only vandalism at the Lincoln Memorial was graffiti at the bottom of the steps at street level, far away from the statue,” said national parks spokesman Mike Litterst.

He said vandalism at the Lincoln Memorial is unusual but not unheard of. “Probably most notable was in 2013 when someone splashed green paint on the statue,” he said in an email. “And it was vandalized twice in 2017, once in February with black magic marker and again in August with red spray paint on one of the columns.”

TRUMP: “The number of ChinaVirus cases goes up, because of GREAT TESTING, while the number of deaths (mortality rate), goes way down.” — tweet Thursday.

THE FACTS: No, increased testing does not fully account for the rise in cases. People are also infecting each other more than before as social distancing rules recede and “community spread” picks up.

As for Trump’s point about mortality coming down, Fauci said that is not a relevant measure of what is happening in the moment with infections. “Deaths always lag considerably behind cases,” he said. “It is conceivable you may see the deaths going up.”

TRUMP on the pandemic: “It’s fading away, it’s going to fade away.” — Fox News interview June 17.

THE FACTS: It’s not fading and not about to.

Coronavirus infections per day in the U.S. surged to an all-time high of 40,000 at the end of the week, eclipsing the previous high of 36,400 on April 24 during one of the deadliest stretches in the crisis. Newly reported cases per day have risen on average about 60 percent over the past two weeks, according to an Associated Press analysis.

Earlier in the week, Fauci told Congress the U.S. is “still in the middle of the first wave” and the imperative is to “get this outbreak under control over the next couple of months.” He said the New York City area, once an epicenter, has done notably well but “in other areas of the country we’re now seeing a disturbing surge of infections.”

The next few weeks “are going to be critical in our ability to address those surgings that we are seeing in Florida, in Texas, in Arizona and other states,” Fauci said. “They’re not the only ones that are having a difficulty.”

Fauci added: “Certainly there will be coronavirus infections in the fall and winter because the virus is not going to disappear.”

Said Redfield: “As we get to the fall, we’re going to have influenza and COVID at the same time.”

TRUMP: “We have got the greatest testing program anywhere in the world.” — remarks Tuesday.

THE FACTS: The U.S. is nowhere near the level of testing needed to stem the virus, according to his own health experts.

Redfield testified that health officials are still working to significantly increase testing capacity, calling such expansion a “critical underpinning of our response.”

The U.S. currently is conducting about 500,000 to 600,000 tests a day. Many public health experts say the U.S. should be testing nearly twice as many people daily to control the spread of the virus. Looking to the fall, some experts have called for 4 million or more tests daily, while a group assembled Harvard University estimated that 20 million a day would be needed to keep the virus in check.

Redfield said the U.S. was aiming to boost testing to 3 million daily “pooling” multiple people’s samples, a technique that is still under review the FDA. He stressed the need for expanded surveillance because some people who get infected may not show symptoms.

“We still have a ways to go,” Redfield said.

The U.S. stumbled early in the pandemic response as the CDC struggled to develop its own test for the coronavirus in January, later discovering problems in its kits sent to state and county public health labs in early February.

It took the CDC more than two weeks to come up with a fix to the test kits, leading to delays in diagnoses through February, a critical month when the virus took root in the U.S.

Associated Press writers Eric Tucker and Matthew Perrone in Washington and Beatrice Dupuy in New York contributed to this report.

EDITOR’S NOTE — A look at the veracity of claims political figures.