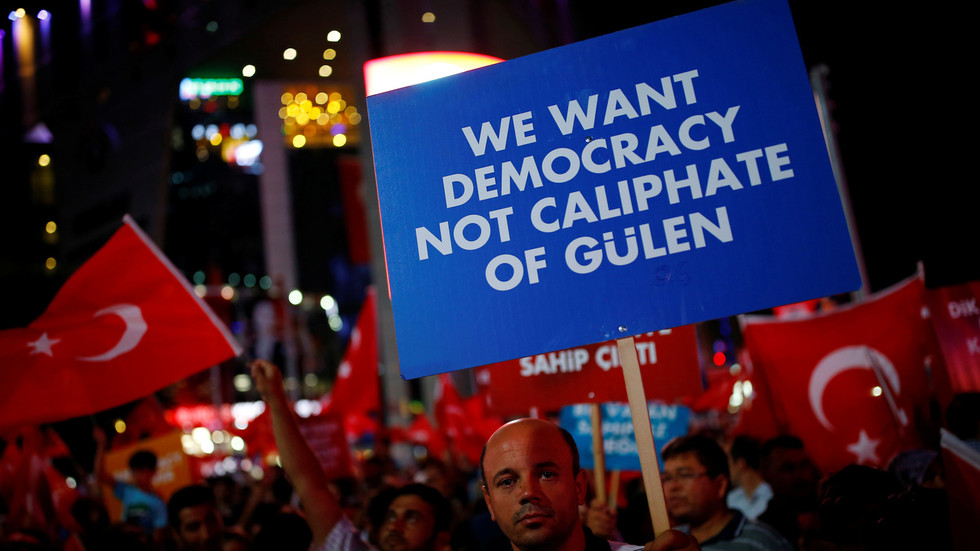 A Turkish court has handed down life sentences to 121 people found guilty of trying to overthrow the country’s president back in 2016. The failed coup has triggered a massive purge, with thousands of Turks being fired or jailed.

The verdicts were announced the court in Ankara on Friday. It found the defendants guilty of attempting to “violate the constitution” three years ago.

Some 35 individuals were given a life sentence for the crime, while another 86 received “aggravated” imprisonment for life. One of the defendants, a former military colonel, has been given a whopping nine “aggravated” life terms, plus an additional 20 years for multiple counts of “deliberate murder.”

The “aggravated” version of the life sentence means tougher prison conditions for the convicted. It was introduced in Turkey in the early 2000s to replace the death penalty, which was abolished as a part of the country’s long-stalled drive to join the EU.

The botched July 2016 coup attempt, staged elements within the military to try to oust President Recep Tayyip Erdogan, resulted in the deaths of more than 250 people, putschists and loyalists alike. It also triggered a massive purge within both the military and the civil service, with more than 100,000 soldiers and public servants being fired or suspended from their jobs, and tens of thousands more detained.

The trials over the coup, which have been going on since 2017, have already resulted in some 2,000 people being put behind bars for life. Elusive US-based cleric Fethullah Gulen, once Erdogan’s ally and now his arch-nemesis, has been named Ankara as the mastermind behind the coup.

According to the authorities, he staged it with the help of an allegedly vast network of plotters, referred to in Turkey as the ‘Fethullah Gulen Terrorist Organization’ (FETO). No solid proof of the cleric’s involvement has emerged since 2016, however, and Gulen has always denied any involvement.

Also on rt.com US consulate worker sentenced to 8yrs in jail in Turkey for helping ‘terrorist organization’ linked to 2016 failed coup

Ankara has been at odds with Washington over Gulen for years, as the US has refused to hand over the rogue cleric. The botched coup only put more strain on the issue.The recent conviction of a Turkish employee of the US consulate for aiding a “terror group” provoked an angry reaction in the US, with the top officials demanding the conviction to “swiftly be overturned.” Turkey’s foreign ministry responded warning Washington to stay away from the country’s judicial system and even accused the US of becoming a “safe harbor” for “members of FETO terror organization.”