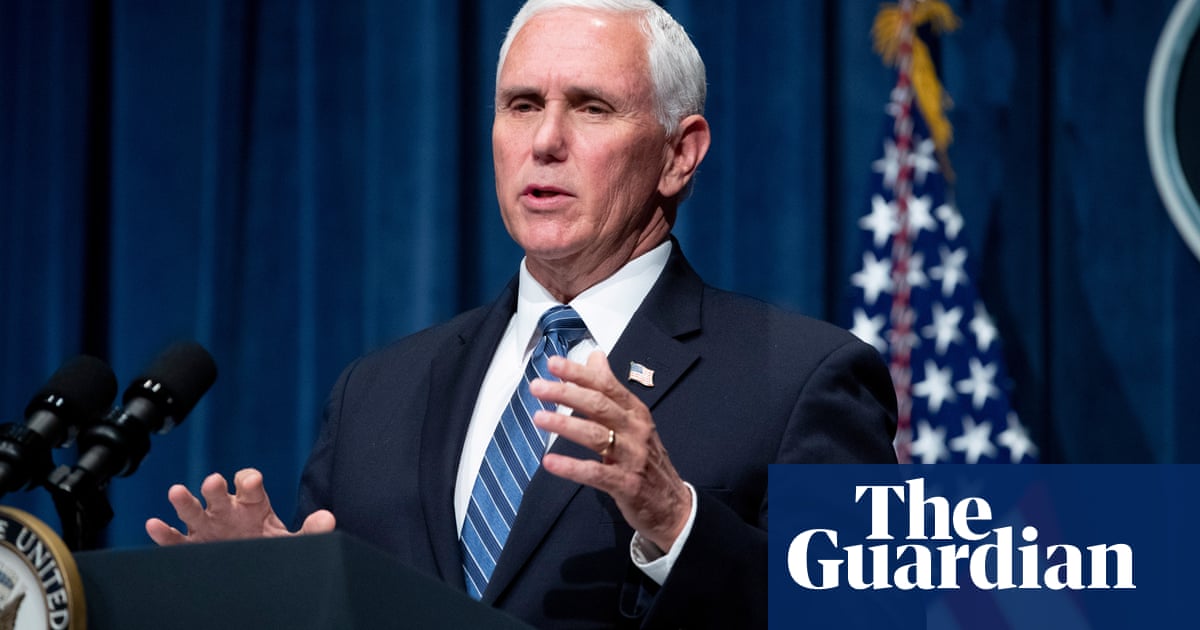 Mike Pence on Friday hailed “truly remarkable progress” in America’s battle with the coronavirus pandemic, despite the US reporting a record 40,000 new cases in the previous 24 hours, the highest daily total of the outbreak.

With new cases rising in a majority of states in the last few days after swift moves to reopen for business, especially across the south and west, the vice-president sought to deliver encouraging news as the head of the White House coronavirus taskforce as the body offered its first public briefing in two months.

Pence acknowledged that “we can see cases begin to rise precipitously across the south”, after the numbers of new daily cases had almost halved since the initial peak of the US outbreak in late April, and he spoke of his deepest condolences for the 126,000 deaths in the US so far.

But he also said that the recent slight recovery in jobs and the rise in retail sales after the US economy had cratered was “encouraging news”.

Pence, as Donald Trump has before him, cited a British study that predicted that without any intervention, the US could lose between 1.5 million and 2 million lives to coronavirus.

“With intervention and mitigation and calling on the American people to embrace mitigation efforts we [aimed to] slow the spread … and we said we believed we could reduce fatalities to 150,000 to 200,000. Where we are today as a nation … we have done just that, we slowed the spread, we flattened the curve and we saved lives,” Pence said.

Previous coronavirus taskforce briefings have been delivered chiefly from the White House and they were a daily occurrence as the pandemic peaked in its initial wave in April.

But with the president taking over those presentations and then veering into party politics and combat with the media in ways that were not connected to public health information, and then began speculating about unproven treatments for Covid-19, those briefings came to an abrupt halt in late April, even as the outbreak was raging in hotspots in New York, California and Washington state.

Friday’s briefing was delivered from the health department, where Pence did not wear a mask even though his fellow taskforce members and top public health experts Drs Anthony Fauci and Deborah Birx did, although they pulled them down when speaking at the microphone.

With record numbers of new coronavirus cases in Texas, Florida, Arizona and California this week, rising numbers in a total of 29 states as of Friday, and the highest daily total of new cases of the pandemic – 40,000 new infections in the US on Thursday – Pence said the US was reopening “safely and responsibly”, while acknowledging “cases rising, particularly in the last week”.

How Trump and his public health officials diverge on Covid-19

Hours earlier Texas had to reverse course on its reopening and order bars to close, while Florida acted similarly and ordered bars to stop serving alcohol.

Pence said the latest peak in the outbreak is “different from what we saw two months ago”. He spoke of the “very encouraging news” that roughly half of new cases are among those under 35, whereas the bulk of cases in March and April involved older Americans. He noted that “younger Americans are less susceptible to the serious outcomes of this virus”.

“Our hearts and our prayers go out to those families who have lost loved ones. But I believe we can still take some comfort in the fact that fatalities are declining,” he said.

And echoing the president, Pence blamed the rising number of new coronavirus cases on increased testing.

However, public health experts have said the rising number of cases is more attributable to states reopening and Americans relaxing social distancing practices.

It’s also important to note that coronavirus hospitalizations are rising in many states, indicating the crisis is worsening.

But Pence said that two months ago 15% of new cases warranted hospitalization, now that’s been reduced to 5%.

Striking a notably different tone than Pence, Fauci warned some parts of the US are facing a “serious problem” in terms of the spread of coronavirus.

But Fauci added: “We are facing a serious problem in certain areas.”

Robert Redfield, the director of the Centers for Disease Control and Prevention (CDC), who testified to Congress this week that the pandemic had “brought this nation to its knees”, also encouraged those under 40 to practice social distancing.

As the taskforce briefing was still under way, Trump, who was not present, began tweeting about protecting federal statues, which are already protected law.

The president sent a tweet sharing an FBI notice seeking information about those suspected of defacing the Andrew Jackson statue in Lafayette Square near the White House.

Asked during media question-and-answer why the Trump election campaign continues to hold large events without mandating face masks or social distancing, Pence said: “Freedom of speech, the right to peacefully assemble is enshrined in the constitution of the United States. And we have an election coming up this fall.”